The Importance of Bathing for Cats

Sometimes cat parents call me and say that their cat needs to be groomed but doesn’t need a bath.

My response is always the same:  I don’t groom cats without bathing them.  Here’s why:

1. If I did not bathe their cat, their cat would be left with all the grease, oil, debris and extra hair on its skin that the cat came to me with.  Result: Their cat is not cleaner after having come to see me.

2. Since the cat is not cleaner, it’s appearance would not be improved and I would be returning a product (the cat) back to the pet parent who would think “Why did I pay money for that?  My cat doesn’t look much better.”

3. I would be doing a disservice to the cat who desperately wants (and needs!) to feel better.

The two case studies below illustrate the importance of bathing the cat and the job that the bath actually does over and above simply combing the cat out or giving it some sort of haircut without incorporating a bath. 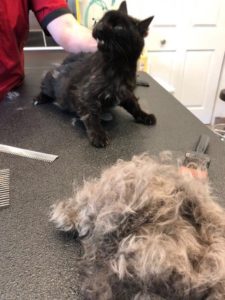 Roscoe is a senior cat who had never had a bath. Roscoe’s mom was skeptical that he could be bathed or even handled. Roscoe is a short-haired cat who had lots of extra hair that was unable to shed away due to the oils & grease in his coat. This is why simply combing him out would not have been an effective solution. I would be able to comb out some hair, yes, but not all of it as there would still be factors in the coat which would prevent a thorough comb out.

Due to Roscoe’s age and the fact that he had never been groomed before, we did his groom in two stages. On the first day, mom brought Roscoe for evaluation to see if he would even tolerate being handled. I was able to comb out Roscoe’s topside – just his back and sides and some around his neck. This photo to the right shows how much hair came out just from that initial combing. It’s enough to start constructing another whole cat! 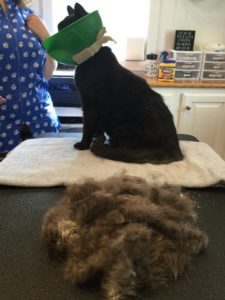 Now that we knew that Roscoe could be handled safely and knew the magnitude of the job to be done, Roscoe’s mom made his appointment for the second part of his groom. For Roscoe’s second appointment, we continued his combout to his belly and underside. We compiled another large pile of hair – just from his underbelly – that could have gone toward the construction of another cat!

Now it was time for Roscoe’s bath. Remember he had never had a bath before. How would he react? Because of all the grease & oils in his coat he got two degreasing baths, followed by a general purpose cleansing & nourishing bath, followed by a conditioning treatment. I think he thought he was in heaven! He didn’t mind the bath at all. After all, he was being massaged with soapy water that was removing all the gunk that had made his coat feel grungy and yucky and any remaining extra loose hair was now leaving his coat because it could!

Roscoe even enjoyed the warm drying phase because he was snugly wrapped in a towel and was being attended to by a “cat cheerleader” (which is what I call my assistants) while the groomer combed out his coat yet again while being dried. After Roscoe was all dried we cleaned out his ears & cleaned his eyes and took this picture of him:

Is this not the regal picture of a proud cat who feels so much better than he did when he came in? This end result would not have been possible without incorporating a cleansing bath experience into Roscoe’s grooming.

Here’s what his mom had to say: I just wanted to let you know that Roscoe (i)s a very different cat after his time with you, seem(s) very happy and proud. Thank you for everything you did for him.

Miles is a long haired cat whose previous groom was 12 months before.  At that time he had had a bath & brushout.  This time mom wanted to try a comb cut to see how that might help to control his extreme fluffiness!
The way a comb cut is done is that a rough cut is done before the bath to take off a good amount of the hair so as to be able to cleanse down to the skin better with shampooing and conditioning products.  It also makes for less hair to have to spend time drying before moving on to the finish cut where all will be evened out and the final result will be crafted. 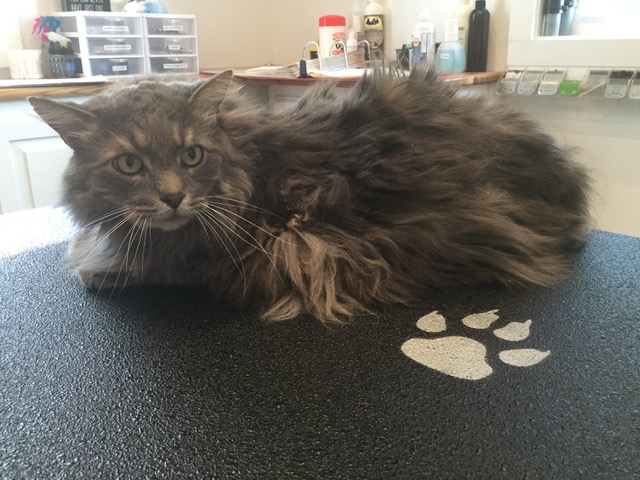 The below photo shows Miles after his rough cut but before his bath.  Notice the separation in the coat and the dandruff on top of his back toward his tail. If we were to simply finish the haircut without giving a bath, Miles would be left with all the grease still in his coat, along with all the dandruff and assorted other debris that might be found.  Not the type of thing most folks want curling up on their pillows! 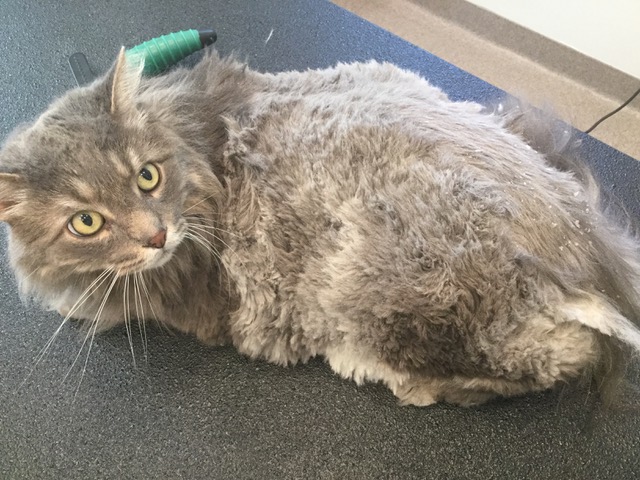 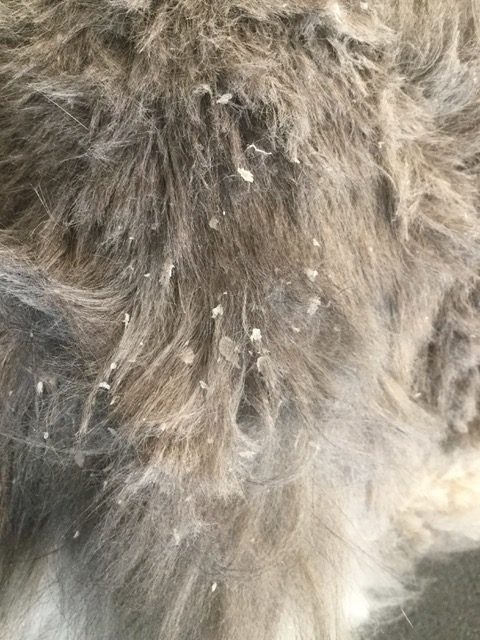 Close up of the dandruff still on the coat pre-bath. 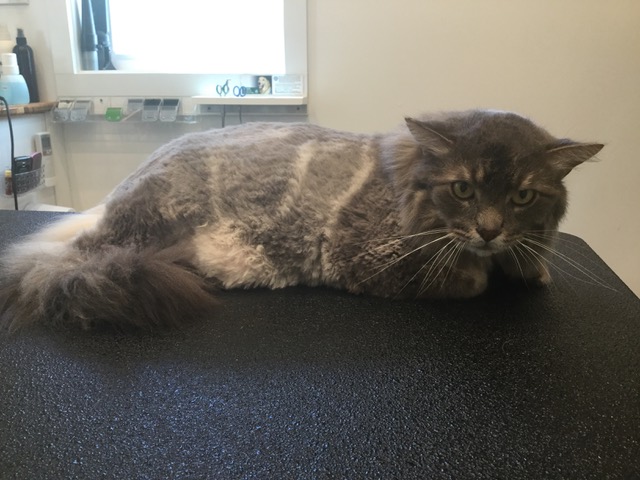 Miles got a good degreasing bath, followed by a cleansing & nourishing bath, followed by a conditioning treatment.  After a complete dry the finish cut was done.  Getting the grease and gunk out of his coat allowed the color pattern of Miles’ coat to emerge.  Who knew he had stripes?  Now he is soft, silky and comfortable.  And mom is liking not finding a bunch of hair around the house!  Plus he is feeling cooler for the summer heat but is left with enough coat so he is not shaved to the skin.  This also allows him to better self-regulate his own body temperature.  His coat will grow out again in 3-4 months so at that time mom can decide if she’d like him to have a full coat for upcoming cooler temperatures or if the comb cut will remain Miles’ new look!
Without a good bath an aesthetically pleasing haircut would not have been possible!  Mom’s comments for Miles & his sister Ella can be found on the “Testimonial” page!  Happy kitty! 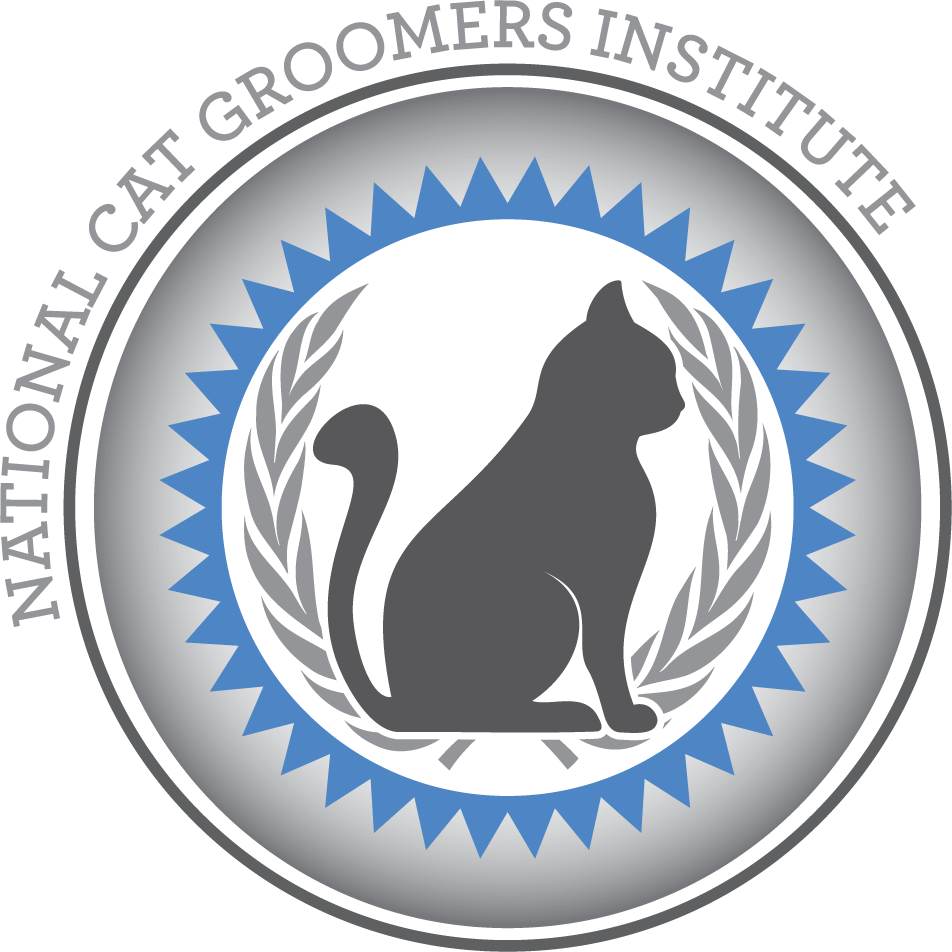